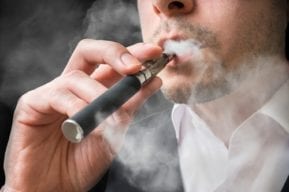 Davis, Saperstein & Salomon, P.C., is investigating claims of consumers who suffered burn injuries and property damage after using e-cigarettes and vaping devices. These devices have also been linked to respiratory disease.

Why Are E-Cigarette Lawsuits Being Filed?

Consumers across the country have brought claims against the companies that manufacture e-cigarettes, or “e-cigs.” The claims allege that consumers suffered injuries or illness due to the following flaws in the design of these nicotine-delivery systems:

Many companies produce and market e-cigarettes as being a purportedly “healthier” alternative to cigarettes. The companies may tout “vaping” as a way to stop smoking.

E-cigarettes do not contain tobacco. The devices use a battery-operated heating element to vaporize nicotine-enhanced liquid, which is typically flavored.

Current smokers and recent former smokers of all ages are more likely than non-smokers to use e-cigarettes and vapes, surveys show. E-cigs are most popular with teens and young adults in their 20s.

Use of e-cigarettes grew rapidly after they hit the U.S. market in 2007. By 2014, more than 2.5 million Americans used e-cigarettes, and at least 466 brands of e-cigarettes could be found in stores and online, according to news reports.

Many safety experts believe those numbers could be higher. They believe that consumers often fail to report e-cig-related burns and other injuries.

The lithium-ion batteries used in e-cigs and vapes include flammable liquid electrolytes that can explode when overheated, the USFA reports. They may overheat while the battery is recharging.

Reports of e-cig explosions and fires describe a loud noise, a flash of light, smoke, flames and, in some cases, ejection of the battery and other parts of the device. Many reports state that the battery or other device components “flew across the room,” igniting fires where they landed.

In October 2015, a California jury awarded nearly $1.9 million to a woman who suffered second-degree burns on her legs, buttocks and hand after her e-cigarette’s battery exploded while plugged into her car’s charger. She filed a product liability claim against the product’s distributor and wholesaler and the store where she bought it.

Lung Damage from E-Cigarettes or Vaping

Companies market e-cigarettes as a healthier alternative to tobacco cigarettes. They contend that e-cig vapors do not damage the lungs like smoke does. However, multiple studies find that the flavoring compounds used by most e-cig companies can cause serious respiratory problems when inhaled.

Manufacturers often use a chemical, diacetyl, to enhance or create flavors in food products. Diacetyl is safe if ingested orally. However, if you inhale the chemical, it can cause a progressive and incurable disease called obliterative bronchiolitis (OB), or “popcorn lung.”

Multiple studies show high levels of diacetyl in popular e-cigarette flavorings. Out of the 159 brands examined in one study, 75 percent contained diacetyl and another chemical, 2,3-pentanedione. Nearly half of the products exposed users to “higher than safe levels” of diacetyl.

Another study conducted after several e-cigarette companies pledged to remove diacetyl from their products found diacetyl in 39 of the 51 products examined.

Lawsuits against manufacturers and distributors of e-cigarettes, vapes, e-cig batteries and e-cig flavorings continue to be litigated. As the number of injured consumers mounts, their claims may be combined in class action lawsuits or as part of a multidistrict litigation (MDL).

If you or a loved one suffered burn injuries or “popcorn lung” illness because of your e-cigarette use, contact Davis, Saperstein & Salomon, P.C. We can help you to seek compensation for your injuries and losses.

Davis, Saperstein & Salomon, P.C. pursues product liability claims nationwide and has a record of success that goes back more than 30 years. Our lawyers have led numerous class action and mass tort cases. We have recovered more than $400 million for our clients.

Contact us today for a free, no-obligation legal consultation. If we can pursue a claim on your behalf or join ongoing litigation, we will not charge you a fee unless we obtain compensation for you.