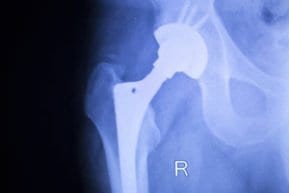 DePuy Orthopaedics, Inc., the manufacturer of metal-on-metal hip replacement implants, is the subject of a class action lawsuit filed by lawyers with Davis, Saperstein & Salomon, P.C., in New Jersey.

Studies indicate that patients who received the DePuy ASR XL Acetabular System metal-on-metal hip replacements may be exposed to dangerously high levels of chromium and cobalt.

The defective medical device attorneys of Davis, Saperstein & Salomon have asked the court to order DePuy to provide compensation to hip implant patients for annual monitoring of their health, future hip replacement surgery, and for damages for pain, suffering inconvenience and injuries.

If you have received a DePuy metal-on-metal artificial hip implant, you are in need of medical monitoring and may have a right to compensation for medical expenses, pain and suffering. The class action filed by our law firm is seeking this assistance for you.

It is crucial that you check with your doctor. If you have been harmed, contact the New Jersey defective medical device attorneys of Davis, Saperstein & Salomon, P.C., today at 1-800-LAW-2000 or through the online contact form for a free legal consultation. You may have a legal right to compensation for damage done by your artificial hip, but the statute of limitations is relatively short and time may already be running out.

One type of metal-on-metal hip implants made by DePuy Orthopaedics, Inc., has been found to be defective and potentially deadly. The DePuy ASR XL Acetabular System has been the subject of a nationwide recall. An investigation indicates the device may cause metal toxicity that damages the implant recipient’s joints or such organs as the liver, kidneys, brain and heart.

A February 2012 report published in BMJ, formerly known as British Medical Journal, stated that hip implants made by DePuy have leaked cobalt and chromium ions. The toxic metals have destroyed patients’ muscle and bone and will potentially leave some patients with long-term disability. Patients will need surgery to remove the faulty implants and install working prostheses.

The BMJ report cited an internal DePuy memo from July 2005 that indicated the manufacturer knew that metallic debris from the hip implants could pose health concerns. The memo quoted an internal study that showed patients had a threefold risk of lymphoma and leukemia 10 years after implantation of the artificial hip.

The U.S. Food and Drug Administration (FDA) warned in 2011 that metal ions that wear off of DePuy metal implants can get into the patient’s bloodstream and damage bone or tissue surrounding the artificial hip.

Davis, Saperstein & Salomon, P.C., filed a class action lawsuit in February 2012 known as Rodham and Gray v. DePuy Orthopaedics, Inc. (Case No. BER-L-1691-12; Bergen County Superior Court). Because it is a class action lawsuit, additional plaintiffs may join the class and benefit from action ultimately granted by the court.

The class action asks that DePuy be ordered to:

If You Have a DePuy Hip Implant

Artificial hip recipients should contact their doctors immediately to determine whether they have metal-on-metal hips. Those who do should obtain a copy of the operative report from the original implant procedure. It will document exactly what was implanted, including the device’s lot and batch numbers.

Patients’ doctors should order blood and urine tests and a special MRI, called MARS (metal artifact reducing), to check for damage from flaking metal (metallosis), including the formation of pseudotumors around the hip.

In addition to contacting your doctor and following his or her advice, a recipient of the DePuy ASR XL Acetabular System implant should contact an experienced medical products liability attorney. Any patient who has been harmed may potentially be part of the class certified in Rodham and Gray v. DePuy Orthopaedics, Inc., and have a right to compensation.

If you have a metal-on-metal artificial hip implant, you should consult with your doctor first to see if you are affected. If you are, contact Davis, Saperstein & Salomon, P.C., about your right to compensation for damage from your artificial hip.

Call Davis, Saperstein & Salomon, P.C., at 1-800-LAW-2000 today or use the online contact form for a free legal consultation.