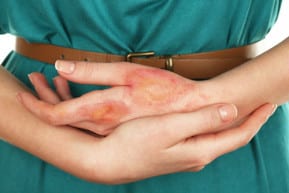 Throughout their careers, the lawyers of Davis, Saperstein & Salomon, P.C., have represented burn injury victims in communities throughout New Jersey and New York.

The following are a few of the many cases that have resulted in a settlement obtained by our attorneys:

The responsible party was proven to be the holder of the property mortgage in foreclosure. The party was collecting the rent but not applying it to repair and maintenance of the apartment within the building. Specifically, the party did not maintain the smoke detectors. The case settled before trial for a structured settlement annuity, payable over several years. (Approximately $28 million).

Case 2: A woman fell asleep in bed while smoking a cigarette

A slow, smoldering fire erupted in the woman’s mattress. The landlord had decided not to supply a smoke detector as required by law. The woman lost four fingers on her dominant hand. (Confidential settlement).

Case 3: A defective heater unit that was improperly installed caused a fire, injured two young girls and caused the death of their father

The contractor, gas supply company and property owner were all sued as well as the victims’ prior lawyer, who had neglected to investigate and timely name all parties to the case. Davis, Saperstein &Salomon, P.C., took over the case and sued all people and companies that were responsible for the cause of the fire.

Case 4: A woman was partially burned when her Christmas tree went up in flames due to a defective Christmas light

The woman was unable to escape because of the installation of a double-cylinder dead bolt lock. The device was manufactured by a prominent company that did not adequately warn consumers about the potential safety issues of installing the lock. The woman suffered extensive burns to her body. The manufacturer of the defective Christmas lights, homeowner and lock manufacturer were sued. The case was settled out of court before trial. Our firm hired a cause-and-origin expert as well as a lock and product warning expert. (Confidential settlement).

Case 5: Two people died when an off duty corrections officer rear-ended their car

The accident caused the car’s gas tank to rupture and explode. A design defect in the vehicle was alleged to cause the fatal explosion. The case was heavily litigated in New York by attorney Marc C. Saperstein, who brought a product liability case against the automobile manufacturer and a case against the driver of the car that caused the accident.

The boy was burned when a waitress in a diner put a pot of hot tea in front of him within his reach, causing it to spill onto his chest and legs.

Each case is different. Although your burn injury case may have similar facts, our firm’s past results do not guarantee an identical outcome in your case. However, these cases do illustrate our firm’s extensive work on behalf of burn injury victims and their families.

If you would like to discuss your case with an experienced burn injury attorney from Davis, Saperstein & Salomon, P.C., please contact us today by calling (800) LAW-2000 or by submitting our convenient online form.

Our consultations are free and can be held in our offices, your home or the hospital. We also can meet with you by Skype, FaceTime and GoToMeeting. If we do not secure a verdict or settlement in your favor, we will not charge for our legal services.