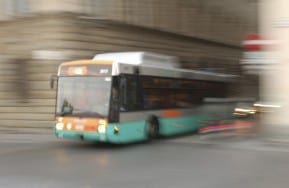 New Jersey police say a tire blowout caused a tour bus to crash on a central New Jersey highway over the weekend, sending 14 people to the hospital with injuries.

According to ABC Local, the Bolt bus was carrying about 50 passengers from Philadelphia to New York when it apparently struck a guardrail on Interstate 295 and left the roadway about 3 p.m. Saturday in Hamilton Township, Mercer County. According to the Times of Trenton, a blown tire caused the driver to lose control of the bus, which went down an embankment after leaving the interstate.

The impact was reportedly violent, leaving shattered glass everywhere as people scrambled to get off of the bus. A total of 14 people were transported to the hospital, while the remaining passengers were put on another bus.

“At this time, the company is working to investigate the cause of this incident and provide local law enforcement with assistance as they work to complete their investigation,” read a statement from Bolt officials.

Many charter and other buses are involved in bus accidents that result in serious injuries and even death to their passengers. These types of serious accidents have the potential to be very tragic simply because of the number of people involved.

A 2008 study of causes of bus crashes by the Federal Motor Carrier Safety Administration analyzed 39 bus crashes that occurred in New Jersey in 2005 and 2006, causing injuries or fatalities. The study found that a large percentage of the crashes were due to driver errors.

Typical human errors by bus drivers include inattention, distraction, haste, and misjudgments, the study said. Other driver errors such as making illegal maneuvers, driving too many hours without rest or following too close are federal violations.

Bus companies have a legal responsibility for the repair and maintenance of buses.

Bus passengers who suffer injuries in a bus accident should not have to pay for medical bills if the accident is caused by a bus company’s disregard for proper bus maintenance and passenger safety.

The New York and New Jersey bus accident attorneys of Davis, Saperstein & Salomon, P.C., are available to discuss your legal options with you after being involved in a bus accident. Our offices include an office in Princeton, New Jersey. You could be entitled to compensation for your injuries and more. Contact us today at 1-800-LAW-2000.