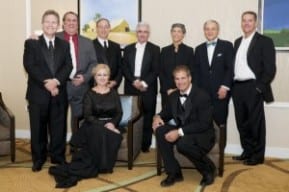 Steven Benvenisti, Esq. was presented with the Helen Hayes Hospital Foundation Outstanding Achievement Award on Friday, November 1 at the Foundation’s Masquerade Ball at the Glenpointe Marriott in Teaneck, New Jersey.

Benvenisti served as the event’s keynote speaker and was honored with the Outstanding Achievement Award after he discussed his experiences as a former Helen Hayes Hospital patient. Six weeks before he was to graduate from college, a drunk driver’s vehicle crushed Benvenisti’s legs and left him in a coma for 10 days. He spent six months at Helen Hayes Hospital, where he underwent 15 surgeries and intense rehabilitation before fully recovering and going on to law school. “The professionals at Helen Hayes Hospital are the reason why I fully recovered from catastrophic injuries and am now able to live the happy and productive life I live every single day,” said Benvenisti.

In 2012, Benvenisti published Spring Break: A True Story of Hope and Determination. There, he describes his injuries, treatment and calling to become a charitable force. “We chose Steven to be the first recipient of the Achievement Award not only because of his incredible strength and determination in making a remarkable recovery, but also because of his advocacy and support of efforts aimed at injury prevention,” said Michelle Davis, Chairperson for the event and Foundation Treasurer. “He truly exemplifies the mission of hope and spirit of Helen Hayes Hospital.”