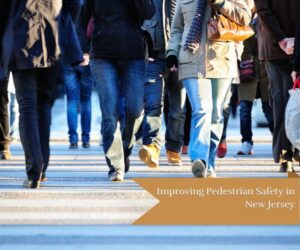 On the evening of Monday, October 31st, a 59-year-old woman was crossing Hudson Street in Hackensack, New Jersey, when she was hit by an oncoming car. Authorities say she was traveling outside the crosswalk when she was hit. The woman suffered many injuries and was taken by ambulance to a nearby hospital. She is still in critical condition. The driver, a 63-year-old man, did not need emergency care and stayed on the scene to talk with authorities.

Sadly, pedestrian accidents are relatively common in New Jersey. In 2022, the annual Smart Growth America “Dangerous by Design” report ranked New Jersey as the nineteenth worst state for pedestrian deaths. The information looked at traffic death statistics across all fifty states from 2016 to 2020. Statistics showed that 870 pedestrians were killed in New Jersey over the five years. This is a death rate of 1.96 deaths per 100,000 people every year. Conversely, Iowa ranked as the safest state for pedestrians, with a death rate of only 0.73 per 100,000 people.

The report also found that minorities living in lower-income neighborhoods experienced a higher death rate. In addition, it found that African Americans are twice as likely to be hit by a car while walking than white Americans are.

How Is New Jersey Working to Improve Pedestrian Safety

The New Jersey Department of Transportation (NJDOT) has been taking steps to improve pedestrian safety. For example, NJDOT recently added bike lanes and upgraded twenty-nine intersections on Main Street (Route 71) in Allenhurst and Asbury Park. In addition, they improved the intersections’ curbs and now have Americans with Disabilities Act (ADA) compliant ramps. The NJDOT has also been working on projects to add other traffic control methods, like lane narrowing, roundabouts, and road diets. The U.S. Federal Highway Administration (USFHA) describes a road diet as a type of road design that changes an undivided four-lane roadway into a three-lane street. The USFHA reports that four-lane roadways have a lot of car crashes, but a road diet can lower their frequency by 19% up to 47%. Route 29 in Lambertville and Route 130 in Burlington City recently underwent road diets under the NJDOT.

The legislative branch is working alongside NJDOT to better pedestrian safety and traffic conditions. Senator Patrick Diegnan and Assemblyman Robert Karabinchak recently introduced a bill for a new law that, if passed, will make a New Jersey 21-member Vision Zero task force. The task force is modeled after the Vision Zero program in Hoboken, which has had no traffic deaths in the last four years. Secretary of Transportation Pete Buttigieg is also planning to implement Vision Zero nationally. The NJ Vision Zero task force would gather data on unsafe traffic practices and recommend how to fix them to lawmakers and Governor Murphy to improve pedestrian safety.

Together, with the combined efforts of the NJDOT, various traffic and safety organizations, lawmakers, and of course, New Jersey families and communities, we can design and build a safer New Jersey.

Laws In New Jersey Protecting the Safety of Pedestrians

It is important to know New Jersey’s right-of-way laws as both a driver and a pedestrian. These laws require cars to yield to pedestrians crossing crosswalks, corners, and other areas marked explicitly for pedestrians. When crossing a street, there aren’t any close corners or intersections; traveling corners is more dangerous in certain situations due to fast-turning vehicles. Pedestrians are not expected to walk unreasonable distances to cross a roadway. In these cases, pedestrians crossing areas other than crosswalks do not have the right of way and must use reasonable care when crossing a street. Motorists can not ignore the possibility of midblock crossers, adults and children on bicycles, and people crossing highways and roadways. They are obligated to look out for and expect pedestrians crossing midblock and avoid colliding with them.

For example, a driver can still be held liable even if it seems they have the right of way. In Leighton v. Sim (1991), the New Jersey Appellate Court settled a lawsuit in favor of the plaintiff. The plaintiff was a pedestrian hit by a car while crossing the street outside a crosswalk. The Court reasoned that if the driver had been paying attention to the road, they would have seen the pedestrian and would have been able to avoid the accident. State and federal law require drivers to pay close attention to their surroundings, so the Court ruled that the driver could be held liable. If the driver of the October 31st accident also could have avoided hitting the pedestrian, he may be held responsible based on the precedent set by Leighton v. Sim.

If you or someone you know was hit while crossing a street, the experienced lawyers of Davis, Saperstein & Salomon, P.C. may be able to help you. Please call us now for a free and confidential case evaluation at 201-444-4444, or chat with us online.