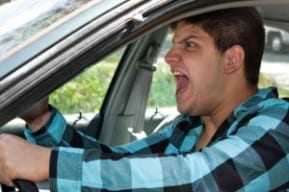 It’s easy to allow your emotions to get the best of you behind the wheel. Whether you are stuck in traffic or cut off by someone more interested in a phone conversation than the road, driving can be frustrating. But road rage or aggressive driving can lead to auto accidents.

Recently, we’ve seen a few stories of road rage accidents in the news locally. Many people have heard about the Manhattan Range Rover driver who was attacked by a group of enraged motorcyclists after he hit a biker.

In a more recent accident, a young mother was killed in Orange County as she drove with her young son. While the details weren’t immediately clear, she was allegedly driving alongside another vehicle for several miles before she was run off the road and ejected.

We all have the potential to lose our temper, but turning that frustration into deadly driving behavior is not the answer.

The driving behaviors that constitute road rage depend on whom you ask. Generally, speeding is recognized as the most common form of aggressive driving. Other examples include:

How Common Is Road Rage?

Avoid getting agitated behind the wheel

As a driver on New York and New Jersey roads, which many think are among the most dangerous in the country, you have a responsibility to remain level-headed. Stay calm even when other drivers are distracted, speeding, or otherwise getting under your skin.