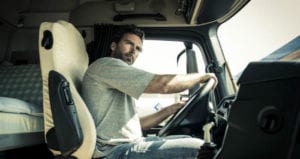 Truck drivers have one of the most important jobs in the country. Without large trucks and the drivers who operate them in New Jersey and elsewhere, goods and products would fail to reach those who rely on them every single day.

However, driving a large truck is a big responsibility. Not only are truck drivers tasked with getting cargo shipments from one place to another on time and without damage, but they must do so without causing a serious tractor-trailer accident.

Because large trucks are much more difficult to operate than are passenger cars, getting a commercial driver’s license is more difficult, truck drivers must be properly trained and undergo background checks. The federal government also intervenes, setting guidelines and standards for service hours and operation.

Despite these stringent requirements, truck drivers are not always fit for the job. In fact, a CBS news report reveals that some truck drivers conceal critical health information when applying for the job or renewing their license.

When truck drivers conceal this information, it can put others in danger.

What Are Some Commercial Truck Drivers Hiding?

As CBS reports, truck drivers must pass a health inspection prior to being issued a commercial driver’s license, or CDL. The health screening is meant to ensure that truck operation is safe for the driver, and the driver does not have any health issues such as epilepsy that may contribute to an accident.

The testing is so intense that, since 2014, about 70,000 truckers have been disqualified from getting a CDL.

But these screenings are not perfect. The main flaw lies in the fact that screeners rely on something very important

Since 2014, about 70,000 truckers have been disqualified from getting a commercial driver’s license (CDL).

If a truck driver is not honest about the trucker’s health, the trucker may very well pass the health screening. And not being honest is exactly what some drivers are doing in order to keep their jobs.

CBS reports that one commercial vehicle driver failed to disclose symptoms of sleep apnea during health screenings. Shortly after the truck driver was cleared to be on the road, the driver was involved in a crash.

The exact cause of the crash is still being investigated. However, a medical examiner who examined the driver prior to the accident suspected that he may have had sleep apnea.

In addition to sleep apnea, other conditions that drivers of commercial vehicles – including buses – may fail to disclose include poor vision, heart problems and breathing or respiratory problems.

Who Is Liable When a Driver’s Health Condition Leads to a Crash?

When a truck driver’s health condition contributes to or causes a crash, determining liability can be confusing. If the driver knew of the health condition and failed to disclose it to a health examiner or employer, then the truck driver could potentially be liable for damages.

If the condition was known by the employer, and yet the employer allowed for the driver to still operate the truck, then the employer could also be held liable.

Further, the employer may be held liable under the theory of vicarious liability. In other words, an employer can be held responsible for the actions of its employees that arise during the course of employment.

It is also important to note that commercial vehicle drivers, operators and companies have a high duty of care. This duty means that truck drivers and their employers have a legal obligation to exercise care during operation. If this duty is breached, the driver or employer may be held liable for damages.

How to File a Claim After a Truck Accident

Medically unfit drivers should not be on the road. They should especially not be behind the wheel of a commercial vehicle such as a large truck or a bus. If you are involved in a truck accident, and you believe that your accident would not have occurred but for a medically unfit driver with a dangerous medical condition, you have the right to pursue legal action.

In New Jersey, you have two years from the date of your accident to file a claim for damages.

Not only will you need to file your claim within the required two-year time frame, but you will also need to be prepared to offer evidence establishing the negligence of the truck driver, trucking company or both. This will require a thorough investigation.

Once you have established that your injuries would not have occurred but for the actions of the truck driver or/and trucking company, you must prove that you have suffered actual losses.

These damages may be economic or non-economic. The latter group of damages refers to compensation for things such as pain, suffering and emotional anguish.

Why You Should Work with an Experienced Truck Accident Attorney

Hiding dangerous medical conditions from medical examiners does not make commercial drivers bad people. After all, losing one’s job can be scary. However, it is still highly dangerous. When it happens and leads to a crash, the truck driver or trucking company needs to be held liable.

Because filing a lawsuit can be complex, it is highly recommended that you work with knowledgeable truck accident attorneys who understand what you are going through and who can guide you throughout the process.

At Davis, Saperstein & Salomon, P.C., we know that pursuing lawsuits can be upsetting, stressful and time-consuming for victims. However, we also recognize that, by failing to take action, you may be unable to recover any money for your losses.

If you are ready to take steps towards seeking compensation after a serious truck accident, contact our offices today.