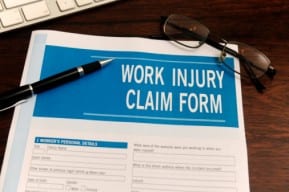 People are often under the misconception that truck accidents are always the fault of the truck driver. In reality, many accidents are caused by other drivers who are uneducated about sharing the road with trucks and other large vehicles.

Car drivers cut trucks off, tailgate them, and travel in blind spots. Many drivers fail to give trucks the room needed to make turns or allow the truck to build up speed so it can safely get up a hill.

Unfortunately, the driving public often sees trucks as a nuisance instead of recognizing that trucks are the backbone of our economy and essential for our modern way of life.

If you are a truck driver who has been injured on the roads of New Jersey or New York, or if you work for a trucking company based out of these states, call the law firm of Davis, Saperstein & Salomon, P.C., today at 1-800-LAW-2000 or complete our online form. We can review your case and explore your options, including filing a workers’ compensation claims.

Benefits differ based on the scope and duration of your injuries. The workers’ compensation scheme is a compromise between employers and labor. There are advantages and disadvantages for both sides. As a trade-off for payments, irrespective of fault, workers usually give up the right to bring a traditional lawsuit. However, if the accident was caused by another, you can sue them through what is called a third-party lawsuit.

If you have been hurt in a New Jersey trucking accident, you must notify your employer of your injuries within 14 days, although in some cases you may have up to 90 days to report the injury.

All New Jersey work injury claims for adults must be filed within two years. Contact a workers’ compensation lawyer at the firm of Davis, Saperstein & Salomon, P.C., for help with filing your claim as soon as possible. You can also see our Workers’ Compensation section.

Workers’ compensation applies to many types of injuries. The most obvious injuries come from accidents, spills and burns. Fortunately, other injuries are covered as well.

Many work-related injuries occur over the course of years due to the strain of a particular type of work. These types of injuries are known as repetitive-stress injuries or occupational diseases. Truck drivers often suffer from back and spinal cord issues caused by driving all day. If you have suffered an occupational disease, you have two years to file a claim, starting from the time you knew of the nature of the disability and it’s relation to your employment.

Truck drivers who have been injured in New York are eligible for New York’s workers’ compensation plan. This system is largely similar to the one in New Jersey, but there are some notable differences.

Truck drivers injured in New York will have up to 30 days to give notice of injury to their employer. Those drivers who suffer from long-term occupational injuries have two years to file a claim, starting from the later of the date of disability or from the date the driver knew or should have known that the disease was due to the nature of the employment.

Davis, Saperstein & Salomon, P.C., works with injured New York truck drivers on securing compensation for their injuries. Contact us today to learn how we can assist you.

Truck drivers are not the only people who may be subject to workers’ compensation laws. Often, warehouse workers are hurt during the process of loading and unloading a tractor trailer. Accidents occur due to faulty packaging and load-shifting.

If you have been hurt while unloading a truck, the lawyers of Davis, Saperstein & Salomon, P.C., will help you decide whether it is appropriate to file a lawsuit or a workers’ compensation claim based on multiple factors.

While workers’ compensation laws bar lawsuits against a truck driver’s employer, they do not bar lawsuits against a company owning a warehouse. Since truck drivers frequently help load and unload trucks, this means that drivers injured in a warehouse may be able to sue the owner of that warehouse instead of – or in addition to – pursuing a workers’ compensation claim.

If you or a loved one has been injured as a truck driver in New Jersey or New York, contact the lawyers of Davis, Saperstein & Salomon, P.C. We can review the facts of your case and discuss all possible options for obtaining compensation, including pursuing a worker’ compensation claim or third-party lawsuit. Simply call us today at 1-800-LAW-2000 or fill out our online form to schedule a free initial consultation.