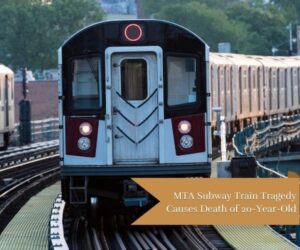 A parent’s worst nightmare by far is a tragic and senseless loss of a child. Our condolences to the parents of Joseph Ancona whose son needlessly died on October 24, 2022, at 4:55 PM, while boarding a subway at Columbus Circle, in New York City.   According to press accounts, Joseph Ancona, age 20, from Westwood, NJ, tried to board the No.1 Train when his bag or backpack became stuck in the closing doors just as the train departed, dragging him onto the tracks where he was struck by a southbound train.  Joe was a well-liked stagehand at New York’s Metropolitan Opera.

Unfortunately, pedestrian deaths involving MTA trains are all too common and preventable.  The Metropolitan Transportation Authority (MTA) accounted for 169 collisions between people and trains in 2020, 63 of which resulted in death.  According to the New York Post, this year, as of August 30, 2022, almost 50 people have died on the tracks.

For example, several years back, a young man fell from a platform onto the tracks where a train ran over him causing amputations of both legs.  The MTA’s investigation denied liability, however, several attorneys at Davis, Saperstein & Salomon, PC dug deeply into the facts and discovered that the platform had a chunk of cement missing which caused a hole in the platform. The hole caught the young man’s foot, causing him to fall onto the tracks.  After years of intense litigation, attorney Samuel L. Davis, and his New York team of attorneys won a settlement of $9,000,000 for the young man. “Their self-serving theory as to the cause of my client losing his legs was just incorrect, said Davis, who further said, “after creating a studio-quality animation showing exactly how the City of New York was negligent, they accepted responsibility and paid my client his settlement.”

According to Davis, Joe Ancona was a victim of negligence likely caused by a negligent Train Conductor whose job it is to professionally operate the doors and look out for passengers in a compromised life-threatening situation.  A detailed investigation will follow, with video footage and eyewitness statements.  Once negligence is proven, the MTA should accept responsibility and compensate the family for Joseph Ancona’s loss of life, pre-impact terror, and his pain and suffering.

According to Wikipedia, the Metropolitan Transit Authority train conductors’ job description is as follows:

As the train departs the station, the conductor observes the platform for a distance of three car lengths. Station departure observations are made to ensure that no passenger or item is trapped between the doors and is dragged along the platform. The conductor is required to observe the forward and rear cars at least twice during these observations.

Although, no settlement will fill the void suffered by Joe’s family, however, if f an employee of the MTA is found to have been negligent, then the MTA should be held accountable.  It seems hard to believe that in this day and age that technology could not have been in place to reopen the doors or alert the conductor that there was a passenger in distress.  Until then, conductors need to be ever-vigilant to avoid human error.   South Korea seems to have an answer with the doors built into the platform.  Proving negligence and implementing change is one way to honor the memory of Joseph Ancona.

Attorney Samuel L. Davis, Esq. is the founding partner of the New Jersey and New York law firm, Davis, Saperstein & Salomon, PC located in Teaneck, NJ. Mr. Davis certified as a civil trial attorney by the Supreme Court of New Jersey.  He, together with his team of NY attorneys have successfully litigated and won cases against the MTA and some of the largest corporations and institutions in America.  Sam Davis can be reached at (201) 907-5000 or by filling out our online contact form.