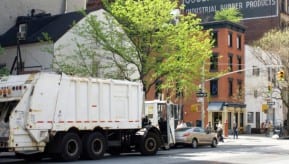 A garbage truck driving south on North Washington Avenue in Bergenfield, New Jersey, struck and killed an elderly woman on Friday morning. The Interstate Waste Services vehicle was in the process of turning left onto East Church Street when it hit the 74-year-old woman who was crossing the street in a crosswalk near a 7-Eleven store. Adoracion Matias Ong, the victim of the accident, was visiting from the Philippines. Bergenfield police and fire department were nearby, attending to an unrelated call, when they heard screams and responded to the scene. Police officers crawled under the garbage truck, pulled Ong out from underneath, and administered CPR until paramedics and first responders from the Bergenfield Volunteer Ambulance Corps took over. Also responding to the scene were Bergenfield detectives and the Bergen County Fatal Accident Investigation Unit. The woman was taken to Holy Name Medical Center in Teaneck, New Jersey, where she later died.

“Our condolences go to the family and Filipino community on this unnecessary loss of life. Trucks and cars must yield to pedestrians crossing in a crosswalk. The driver of the Interstate Waste Services garbage truck had a duty to yield to her, allowing her to safely cross East Church Street,” said Garry Salomon, an attorney certified by the Supreme Court of NJ as a Civil Trial Attorney and a partner at Davis, Saperstein & Salomon, P.C., a law firm in Teaneck, New Jersey.

The truck driver, whose name has not been released, was not injured in the collision. The Bergen County Prosecutor’s Office investigation of the crash determined the death of the pedestrian was an accident. No charges have been filed against the driver of the Interstate Waste Services truck, a Jersey City based trucking company.

The firm of Davis, Saperstein, and Salomon, P.C., helps victims of truck accidents in New Jersey and New York. Their experience and hard work on wrongful death cases help get accident victims the best verdict or settlement available under the law. People injured in a serious accident in NJ or NY can call for a free and confidential consultation or to discuss their legal options.

The author Renee Rivas is an associate attorney in the personal injury department of the Teaneck New Jersey law firm of Davis, Saperstein & Salomon, P.C., and she concentrates her practice on representing people and families injured in all types of accidents. She is able to communicate with her clients in English, Spanish and Tagalog. She can be reached at 1-800-LAW-2000.