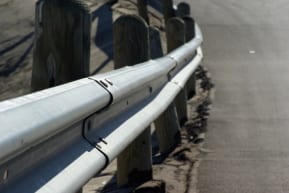 New Jersey has become one of 31 U.S. states, including New York, that prohibit the use of a type of highway guardrail that has been linked to serious injuries and deaths in car accidents.

The banned guardrail is made by Trinity Industries, Inc., and it is known as the ET-Plus Guardrail System. The guardrail’s rail head or end terminal is suspected of having a dangerous defect that could lead the guardrails to slice through vehicles instead of crumpling and falling away, The New York Times explains.

The allegedly faulty guardrail may be responsible five deaths and many more injuries in at least 14 accidents nationwide, The Times states in an October 12 report.

A federal jury said in October that Texas-based Trinity Industries violated the False Claims Act when it made money-saving changes to a federally approved guardrail design and did not tell the Federal Highway Administration about it, the Dallas Morning News reports. The jury said the omission amounted to fraud on the federal government.

A Federal Highway Administration (FHA) memo states that Trinity reduced the width of the channel behind the railhead by an inch and did not advise the FHA of the change or submit the newly designed device for testing. Highway officials in several states say the narrower design may cause the malfunction, according to the Times.

The federal jury did not address safety issues but said that, because Trinity did not advise the FHA of the change, the agency had paid for something it did not receive. Trinity was assessed $175 million in damages, which are to be tripled, and ordered to pay legal fees incurred by the whistleblower who worked to advise authorities of the design change.

The FHA continues to allow states to use federal funds to buy and install the controversial railheads, according to the Times. However, a senior engineer with the FHA who was responsible for examining the guardrails “expressed reservations about their safety before he signed off on their continued use about two years ago.”

The FHA said this week that Trinity would begin retesting the four-inch ET-Plus guardrail end terminal next week with FHA engineers present.

The N.J. Department of Transportation and Turnpike Authority announced on October 31 that the Trinity ET-Plus guardrail end terminal would no longer be allowed in new construction or maintenance projects in the state, according to NJ.com.

Virginia has said that it is planning to remove existing Trinity guardrail heads from the road.