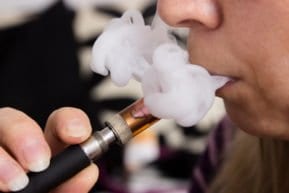 As recently as summer 2017, New York passed a law banning the use of electronic cigarettes at all public and private schools and in vehicles used to transport students.

The use of e-cigarettes has become increasingly popular, particularly among young people. A report by the New York Department of Health indicated that the number of high school age students in New York State using e-cigarettes doubled from 10.5 percent to 20.6 percent between 2014 and 2016. Presently, e-cigarettes, also known as “e-cigs,” are the most commonly used cigarette product.

E-cigarettes contain a battery, a heating element and a place to hold liquid that typically contains nicotine. The e-cigarette device heats the liquid until it vaporizes, and the user inhales the vapor into their lungs. While some think that “vaping” is safer than smoking traditional tobacco cigarettes, the fact is that nicotine exposure of any kind can harm the developing adolescent brain and lead to addiction.

Many school campuses in New York and across the country were tobacco-free or smoking-free prior to the passage of recent e-cigarette legislation. Because e-cigarettes do not contain tobacco, they were technically permitted under New York’s Public Health Law. Thanks to New York Senator Patty Ritchie, the Public Health Law now also prohibits the use of e-cigarettes on school grounds and in vehicles transporting students.

The new Public Health Law is one of several measures that have been undertaken by New York to protect teenagers from the dangers of smoking and nicotine use. Senate testimony cites the following reasons for amending the law to ban e-cigarettes:

New Jersey also has laws in place that prohibit the use of e-cigarettes at schools and in other public places. New Jersey also prohibits the sale or distribution of the product to anyone under the age of 19.

The impact of E-Cigarettes and Recent Legislation on Adolescents

The National Institute on Drug Abuse (NIDA) reports that while smoking rates have generally decreased during the last decade, e-cigarette use has risen sharply. Many attribute the increase in e-cigarette use to pervasive advertisements targeting young people that falsely claim that vaping is safer and healthier than smoking standard cigarettes.

There are more than 450 brands of electronic cigarettes currently on the market. They come in a variety of shapes and sizes. E-cigs usually utilize small canisters of flavored fluid and a battery powered heating element, which creates vapors that users inhale. The vapor contains nicotine, and users are able to control the amount they intake. When exhaled into the air, nicotine in aerosol vapors can impact others in the user’s vicinity, similar to secondhand smoke.

Laws limiting the use and availability of e-cigs have the following benefit. They help to

Electronic cigarette laws can also help prevent a dangerous and highly prevalent practice called “dripping,” which involves placing e-liquid drops directly on heated atomizer coils. Dripping can be especially dangerous because it results in a more intense flavor and can deliver larger amounts of nicotine into the bloodstream.

Concerns About Electronic Cigarette Use

The Centers for Disease Control and Prevention (CDC) state that while electronic cigarettes have the potential to benefit adults who are already hooked on nicotine, they are unsafe for young people, pregnant women, or those who do not currently use tobacco.

One benefit promoted by e-cigarette makers is the fact that e-cigs do not contain tar, which is produced by smoking traditional cigarettes. What these manufacturers don’t mention is that e-cigarettes may contain heavy metals such as nickel, tin and lead, along with other dangerous chemicals that are linked to increased rates of cancer and lung disease. E-cigarettes also often contain larger quantities of nicotine than standard cigarettes, which is widely known to be highly addictive, harmful to developing brains and toxic to unborn babies. If e-liquid is swallowed or absorbed through the skin, it can be lethal.

Another less common but still serious danger is the risk of a malfunctioning e-cigarette devices. The CDC reports that defective electronic cigarettes have caused fires and explosions, resulting in severe facial and hand burn injuries. The Food and Drug Administration is compiling evidence on these defective products. In so doing, they have noted that users are most frequently injured while the e-cig device is charging.

If an explosion or fire occurs while using or charging the e-cigarette, the FDA recommends reporting the incident, making note of the name of the e-cig manufacturer along with the brand name, model and serial number of the device and the location where it was purchased. Such quick action may result in a recall or discontinuation of sale of the potentially dangerous vaporizer or e-cigarette.

Have You Suffered an Injury or Illness Due to Electronic Cigarettes?

Electronic cigarette malfunctions involving fires or leaking nicotine fluids can result in serious burns and illnesses. If you have been injured by a defective e-cigarette, contact Davis, Saperstein & Salomon, P.C. Our experienced product liability attorneys can advise you on how to hold negligent e-cigarette manufacturers accountable and pursue compensation to cover your medical bills and other losses, such as pain, suffering and disfigurement.

Our law firm has been providing trustworthy, dependable legal representation for more than 30 years to clients throughout New York and New Jersey. Call or contact us online to request a free consultation to discuss your e-cigarette or vaporizer injury and legal options. There is no legal fee unless we obtain financial compensation for you.