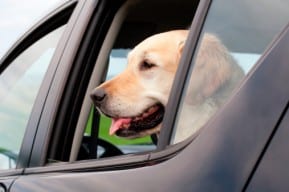 Sometimes it’s hard to know who to blame in a car accident. Sometimes more than one driver is at fault; at other times a single person is to blame. But what happens when no one is in the vehicle that strikes a pedestrian? What happens when an unattended car is responsible for injuries?

An empty car is one thing, but as a strange news report out of York, PA, showed this past week, one occupied by a dog offers a unique situation.

According to NBC New York, the owner of a vehicle left his dog inside his running Dodge truck as he exited the vehicle. Though we don’t know where the vehicle’s owner went, while he was out of the truck the dog somehow managed to put it in gear, sending it forward.

An unsuspecting pedestrian became caught between the dog-driven truck and another parked vehicle. He was transported to the local hospital for his injuries after he fell, unconscious.

So, who is to blame?

Because we can’t hold a dog responsible for steering the vehicle into the pedestrian, the logical solution is to hold his owner responsible. After all, you know there is a chance, albeit slight, for something tragic to occur if you leave your vehicle running and unattended.

There were several things the truck owner could have done to prevent the accident, and that is crucial in determining who is to blame. He could have shut off his vehicle. Even applying the parking brake would have stopped the truck from moving if it was accidentally knocked into gear. Removing his dog from the truck, or not exiting the truck in the first place, would have prevented the accident, too.

In short, the at-fault party in a car accident does not necessarily have to be in their vehicle to be held responsible for the damage caused. The injured pedestrian, in this case, could potentially file a claim with the truck owner’s insurance company for compensation.

Whether you are involved in a pedestrian accident or a car crash, a local personal injury attorney can help you get the compensation you deserve. Call the car accident lawyers of Davis, Saperstein & Salomon, P.C., today to discuss your case. Call 1-800-LAW-2000 now.