A malfunctioning elevator in Wayne, New Jersey, trapped and severely injured our client when the elevator abruptly dropped several feet. After Davis, Saperstein & Salomon, P.C. partners Garry R. Salomon and Adam B. Lederman proved that the building owner and two elevator companies had been negligent in improperly maintaining the elevator, our client was awarded a $715,000 settlement.

His fall led our client to suffer severe injury to his lower back. He was diagnosed with disc herniations at L5-S1 and C6-C7, which caused extensive pain to his hands, legs, and back. To treat the L5-S1 herniation, he first underwent a lumbar epidural spine injection, but the injection only worsened his condition. Then, he underwent a two-level lumbar fusion surgery, which included an anterior lumbar discectomy, a bilateral foraminotomy, an anterior lumbar interbody fusion, the insertion of a fusion cage, the insertion of a plate and screw fixation, and the placement of crushed cancellous allograft. 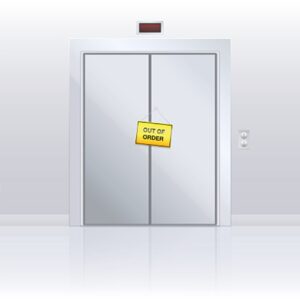 Davis, Saperstein & Salomon, P.C. partners Garry R. Salomon and Adam B. Lederman retained an engineering expert to determine the cause of the elevator malfunctioning. The expert stated that industry practice is to limit the number of callbacks for a hydraulic elevator to three callbacks per year; the expert found that the elevator in the accident had eleven callbacks in the ten months leading up to the accident, three of which were in the nine days leading up to the accident.

He found that the elevator companies were therefore in violation of the New Jersey Administrative Code, Reference 37, which states, in part, that “all operating and electrical parts and accessory equipment or devices for elevator devices shall be maintained in safe operating condition”. The expert also determined that the building owner had acted negligently, because they allowed the elevator to remain in operation despite its numerous callbacks. As such, the expert found that the building owner, and the two elevator companies in charge of maintenance, had created a hazardous environment for their patrons.

Davis, Saperstein & Salomon, P.C. partners Garry R. Salomon and Adam B. Lederman ensured that that our client received proper compensation for his injuries, pain, suffering, and lost income, in the form of a $715,000 settlement.

Settlements are often limited by the total available insurance coverage. Insurance company adjusters and their lawyers often defend cases by claiming that a client was negligent and could have avoided being injured by arguing comparative negligence on the part of an injured client; or that their pain and suffering was caused by pre-existing medical conditions or prior injuries. Despite those defenses, the Davis, Saperstein & Salomon, PC lawyers won their client’s injury claim. Each client’s case is unique. Results may differ because of different facts, circumstances and available insurance coverage.

Call us now for a free and confidential case evaluation. We are also available 24/7 online at our website, www.dsslaw.com.

Disc herniation: Occurs when the exterior of a disc cracks and its nucleus pushes into the spinal canal and irritates surrounding nerves.

Lumbar epidural steroid injection: An injection into the epidural space by the spinal cord in the lower back, intended to reduce nerve inflammation.

Anterior lumbar discectomy: A surgical procedure that removes the disc and the disc material pressing on the spine.

Bilateral foraminotomy: A surgical procedure that removes a small part of the affected bone to enlarge the passageway through which a spinal root nerve branches from the spinal canal.

Fusion cage: An interbody cage that may be made of metal, polymer, ceramic, or a fusion of other materials. It is put in place of the affected disc after the disc was removed.

Crushed cancellous allograft: Used to fill gaps or voids in the skeletal system.