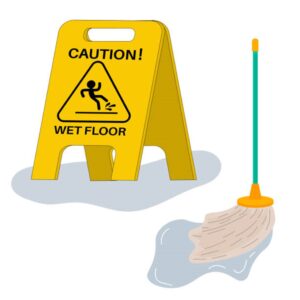 A New Jersey client slipped and fell while exiting a hotel elevator in Elizabeth, New Jersey. She sustained serious injuries to her back, but was awarded a $500,000 settlement after Davis, Saperstein & Salomon, P.C. partners Garry R. Salomon and Adam B. Lederman proved that the hotel had been negligent in failing to maintain a safe environment for patrons.

As our client exited the elevator, she noticed a puddle of water on the floor. She attempted to circumvent the puddle, but when she was unable to, she slipped and fell. After falling, she noticed that there was a “Caution” sign posted in between the two adjacent elevators, but it was only in view of patrons entering the elevator—not those exiting.

Davis, Saperstein & Salomon, P.C. partners Garry R. Salomon and Adam B. Lederman retained an engineering expert to determine which parties were liable for the accident. The expert determined that the hotel had been negligent in their duty to maintain a safe environment for patrons and employees. The expert opined that the hotel had violated sound safety judgment in their failure to maintain a dry floor and/or a slip-resistant walking surface during a time of reasonably foreseeable guest usage. As such, the hotel was found to be entirely liable for the accident.

As a result of the hotel’s negligence, the client suffered extensive injury to her lumbar and cervical spines. In her lumbar spine, she suffered a disc herniation at L5-S1 and severe spinal canal stenosis due to Grade I anterolisthesis of L4 and L5. In her cervical spine, she suffered disc herniations at C4-C5, C5-C6, and C6-C7. To treat her lumbar spine, our client underwent several lumbar epidural injections, but they only lessened her pain temporarily; as such, she sought surgical intervention. She underwent a two-level lumbar fusion that also aimed to decompress the left L4, L5, and S1 nerve roots. Following the surgery, she continues to suffer from neck pain and lower back pain.

Her physical suffering has tragically altered her life. Her hours working as a flight attendant have been cut in half, and she is unable to take international flights. She is unable to lift items of substantial weight, which impairs her ability to grocery shop, cook, and complete household chores. She experiences great discomfort when she bends over or reaches for something. Moreover, she is at risk of her condition worsening, specifically if she develops premature posttraumatic arthritis of the spine.

Davis, Saperstein & Salomon, P.C. partners Garry R. Salomon and Adam B. Lederman retained an economics expert to determine the extent of economic damages suffered by our client. The expert found that the accident had lost her over $200,000 in lifetime earnings and over $100,000 in household services.

As such, Davis, Saperstein & Salomon, P.C. partners Garry R. Salomon and Adam B. Lederman ensured that our client received proper compensation for her injuries and financial losses, and secured our client a $500,000 settlement.

Do you or someone you know have similar injuries or circumstances to this case? Our dedicated legal team of over 25 attorneys is here to help. Call now for a free case evaluation or reach out online and we’ll call you back.

Cervical spine: The first seven vertebrae in the spine.

Disc herniation: Occurs when the exterior of a disc cracks and its nucleus pushes into the spinal canal and irritates surrounding nerves.

Spinal canal stenosis: A medical condition where the spinal column has narrowed and is compressing the spinal cord.

Grade I anterolisthesis: A mild form of the medical condition in which the upper vertebra has begun slipping over the lower vertebra.

Epidural injection: The injection of anti-inflammatory medicine into the epidural space in the spine.

Posttraumatic arthritis: Inflammation that occurs in the joints after an individual has experienced a trauma.

Top Workplaces is an employer recognition program that promotes exceptional culture, Top Workplaces awards are based on employee engagement surveys.