Home Blog Which Area Emergency Room is the Best?

Which Area Emergency Room is the Best? 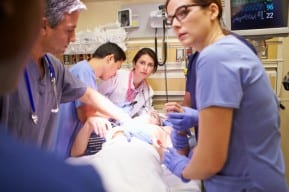 When you have a medical emergency, you normally don’t have time to think about where you are headed – you just need help, and you need it quickly. But not all area emergency departments are of the same caliber. Going to a sub-par hospital could increase your risks of suffering a medical error or even a preventable death.

There are several factors involved in determining which hospital can provide the best emergency care. Depending on where you look, you will likely find different answers. Some rankings are based on data from the federal government, analyzing deaths per treated patient, while others are based on patient surveys and wait times.

Busiest Emergency Rooms May Be Better Than Others

A new study on emergency room treatment suggests that the busiest emergency departments are most often the best.

Among 4,783 short-term acute care hospitals in the U.S., HealthGrades chose 263 hospitals to represent the top five percent in emergency care quality, according to MedScape.com

The differences in survival varied depending on the health problem being treated. Serious, time-sensitive conditions had the most dramatic differences, with death rates 26 percent lower for sepsis patients and 22 percent lower for lung failure patients that visited the busiest emergency rooms.

In 2012, a study by HealthGrades analyzed records from more than seven million Medicare patients between 2008 and 2010 for 12 diagnoses. From hospital to hospital and market to market, the survey found mortality rates differed in those patients admitted through emergency departments.

Among 4,783 short-term acute care hospitals in the U.S., HealthGrades chose 263 hospitals to represent the top five percent in emergency care quality, according to MedScape.com. The entire list of those emergency rooms receiving “Excellence Awards” can be found here.

Among all of the hospitals listed by HealthGrades, the top five percent had mortality risks 41.52 percent lower than all other hospitals.

Which Emergency Room Should You Choose?

If there is research suggesting one emergency department is better than the other, wouldn’t you want to go there for your treatment? Researchers from the HealthGrades study and the more recent University of Michigan study say the answer is not so simple.

The experts say that finding the nearest emergency room should take priority over finding the “best” when you are in an emergency situation.

After all, time is of the essence when you are experiencing a medical emergency. The time it takes to travel to a higher ranking hospital could mean the difference between life and death.

If anything, the lessons provided in these studies are targeted at hospital administrators and not at patients. It’s these decision-makers in emergency departments that have a duty to provide the absolute best care possible and to offer accountability when a preventable medical mistake occurs.