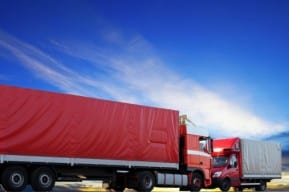 An early morning crash on Route 78-E in Clifton left one driver dead and many stuck in traffic for hours. At approximately 3:30 a.m. on Friday, July 12, 2013, a tractor-trailer struck a flatbed truck. The flatbed truck, carrying steel bars, was parked on the shoulder when it was hit by an 18-wheeler carrying beer.

Early investigations point to the driver of the tractor trailer losing control of his truck. His vehicle hit the left side of the flatbed, ripping the wheels off of the flatbed’s tires. It then continued up an embankment on the shoulder where it hit a tree. The truck turned over and the mangled trailer was left on its side.

The driver of the moving vehicle, Lloyd King, Jr., was pronounced dead after being airlifted to a nearby hospital. A 12-year-old passenger in the tractor-trailer was reported to have suffered minor leg injuries. The occupants of the flatbed were not seriously injured. No other injuries were reported and no other vehicles appeared to be involved. Traffic was delayed for hours as crews worked to extricate the driver of the beer truck and clear debris.

Attorney Marc Saperstein says it is too early to blame anyone for this accident. “While it appears that the driver of the tractor-trailer lost control, we don’t know if the flatbed was parked safely. If it was intruding into the roadway, it may have been a contributing cause of the accident.”

Saperstein encourages drivers to always move disabled vehicles as far off of the roadway as is safely possible. “When a driver stops to check on their car, they put themselves and everyone in the roadway in danger. Moving a safe distance from the road helps reduce the risk of injury.”

Because the accident occurred so early in the morning, there is also a possibility that the truck driver was fatigued. Federal laws limit the hours that truck drivers are allowed to work, but drivers have been known to falsify logs of their hours or find other ways to skirt regulations. “When victims of a truck accident come to us with an injury, we immediately request the logbooks from the truck driver and other paperwork from the trucking company. This can help prove that a driver was overworked,” said Saperstein, an attorney at the Teaneck, NJ personal injury law firm of Davis, Saperstein, & Salomon, P.C.

Marc Saperstein has handled dozens of truck accident injury cases in New Jersey and New York. He thinks that tougher regulations may be the answer to truck accidents. “We need to make sure drivers are awake, alert, and off of their phones when they are on our roads. Additional restrictions on the number of hours worked, as well as on cell phone use may help reduce the frequency of truck accidents in our state.” Marc Saperstein can be reached for further comment or with questions about a particular accident at (800) LAW-2000.