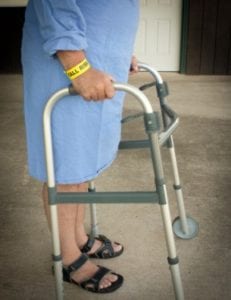 Hip fractures are one of the most common results in falls among the elderly. An independent and mobile elder can be left with severe physical impairments after these injuries.

However, a new study suggests that the outcomes for nursing home residents who suffer hip fractures could be even worse than for people who live in the community.

The study, published in JAMA Internal Medicine, found that half of all nursing home residents who fracture their hip either die or lose the ability to walk unassisted within six months of the accident.

Patients with hip fractures have increased disabilities across the board, the lead researcher, Dr. Mark D. Neuman, told Reuters. Both survival and functional status were dramatically affected in nursing home residents.

Neuman, of the Perelman School of Medicine at the University of Pennsylvania, and his colleagues looked at Medicare claims and nursing home data involving more than 60,000 nursing home residents hospitalized for hip fractures from 2005 to 2009. Most of the elders involved were able to get around independently before the accident.

One in three patients had died just six months after hip fracture hospitalization. For men, the rate was one in two, or half.

Residents ages 90 years and older and those who did not have surgery following the fracture were most likely to die or to become completely disabled.

Of those nursing home residents who survived, 28 percent became completely dependent on others to get around. More of them depended on assistance in personal care, using the bathroom and turning over in bed.

Without the ability to turn, get up or care for themselves, these residents are put at risk of suffering nursing home neglect.

A year into the study, almost half of all hip fracture victims had died.

Even when a hip fracture happens outside of a nursing home, it can have problematic outcomes. As the Centers for Disease Control and Prevention reports, one in three adults who lived independently before their hip fracture remain in a nursing home a year after their injury.

It is not unusual for an elderly patient to be admitted to a nursing home after a hip fracture. Often, these stays last only a few months, or until the resident gains strength and is able to get around independently again. However, some never regain this mobility.

A common risk after a person suffers a hip fracture is that he or she will suffer a fracture again. This is particularly true among formerly independent elders who now depend on others to assist them in moving around.

Imagine having your independence robbed from you. Now, you must wait for a nurse to help you to the restroom, to turn you in bed or to move from your bed to a wheelchair. What happens when that nurse fails to come to you as quickly as you need or fails to attend to you at all?

Nobody wants to let go of their independence, but when there is no other choice, you need to know that you (or your loved one) is cared for in a facility that will take their assistive needs seriously.