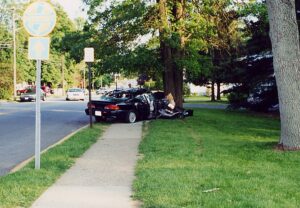 An 18-year-old from Hackensack, New Jersey sat in the backseat of a Pontiac Bonneville when the driver of the car lost control and swerved into a tree off the nearby road. After Davis, Saperstein & Salomon, P.C. partner Garry R. Salomon proved that, collectively, two different vehicles were negligent in causing the car accident, the teenager received a $1.5 million dollar settlement.

The teenager was in the backseat behind the passenger side enjoying a ride with his friends and listening to music. As the Pontiac traveled southbound on Central Avenue in West Caldwell, New Jersey, a 2-door Datsun pulled out into the intersection going westbound on Washington Avenue. The Datsun came from the left side and stopped toward the middle of the intersection—connecting Central Avenue, Washington Avenue, and Stonybrook Road—causing the Pontiac to swerve to the right and try to avoid the collision. The Pontiac then hit the curb on Stonybrook Road, causing the driver to lose control. The Pontiac collided with a tree on a nearby property.

The responding West Caldwell Police Department officers conducted four voluntary interviews with witnesses to the accident. In these interviews, the other passengers of the Pontiac stated that the driver never exceeded the speed limit, except to perhaps accelerate past the Datsun in the intersection. Both passengers of the Pontiac also claim that the Datsun did not stop at the stop sign. The negligent driver of the Datsun disputed this, testifying that she was stopped at the stop sign for as much time as it took for four different cars to pass through the intersection. 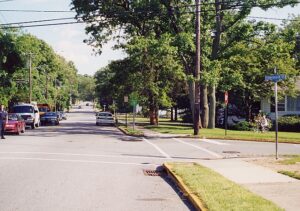 The West Caldwell Police Department found the teenager on the ground, ejected outside of the Pontiac. An ambulance took the teenager to the University of Medicine and Dentistry of New Jersey, now Rutgers School of Biomedical and Health Sciences. He was admitted in and out of the hospital for the following months, suffering from numerous permanent injuries to his internal organs: his liver, kidney, and colon. As a result, the teenager required surgery to remove a portion of his small intestines and his colon. He also underwent the installation of 5 different chest tubes, multiple abdominal drains, and intubations. Notably, the teenager was required to undergo a tracheotomy which left permanent damage and tracheal scarring.  He was also left with a noticeable disfigurement in his back.

The injuries and procedures had long-term effects on the teenager. Following the accident, he had trouble with everyday tasks: sitting, walking, breathing. The young man, a New York college student, now majors in communications and is destined to become a sports announcer for professional hockey. Although the insurance coverage was limited, much of the settlement was crafted together with underinsurance coverage as well as the client’s family homeowner: insurance policies that provided certain umbrella UIM coverage as part of the masterpiece insurance policy purchased by the teenage client’s father well before the accident.

As a young man entering college, the injuries and accompanying scars also negatively affected his personal life. Not only were his friendships affected since he could no longer partake in the physical activities that he used to, but he also felt uncomfortable pursuing romantic relationships. The longtime athlete also had to end his passionate pursuit for a hockey career. Following the accident, the injured passenger also suffered from accident-related post-traumatic stress disorder (PTSD). He was fearful of getting into a car and delayed obtaining his driver’s permit and license.

The settlement money was used to pay his college tuition and start his life on the right track. Do you or someone you know have similar injuries or circumstances to this one? Our dedicated legal team of over 25 attorneys is here to help. Call now for a free case evaluation or reach out online and we’ll call you back.

Intubation: the insertion of a tube into a patient’s body

Tracheotomy: an incision in the throat made to relieve an obstruction to breathing

Post-Traumatic Stress Disorder (PTSD): a mental disorder that may occur in people who have experienced or witnessed a traumatic event; causes intense, disturbing thoughts and feelings related to that experience