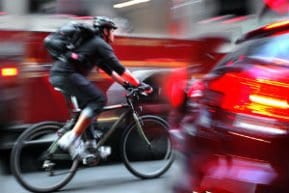 With the increase in bicycle usage over the last few years, it is no surprise to learn that many cyclists are injured or killed while on the road. While many have decided to give up vehicles and use bikes as their main mode of transportation, the threat has increased exponentially, and the roads and sidewalks are becoming more dangerous each day.

Our attorneys at Davis, Saperstein & Salomon, P.C. have witnessed firsthand the devastating consequences that can occur as the result of a bicycle accident. In an overpopulated state like New Jersey, a person can never be too cautious while going about their day.

According to a study from 2012, there were 19,551 bike crashes in 13 northern NJ counties over that decade. 81 of them proved fatal. The 13 counties study averaged 1,777 bike accidents per year. Bergen County had the highest average of yearly crashes during the 2001-2011 time period, with 270. In 2015, 18 bikers were killed on NJ roadways, raising the death toll by 64%, according to NJ State Police figures. Wearing a helmet has been credited in saving the lives of many bicyclists who are involved in accidents. In the US, there were a total of 429 no-helmet related bike deaths in 2014, as opposed to 118 deaths of riders wearing helmets.

It may be shocking to learn that New Jersey is not the most dangerous state in the United States for bicyclists, though. In 2013, there were 14 bike deaths in the state, which averaged to 1.57 per one million residents, while the national average was 2.35. NJ ranked #27 in the country. Florida was #1 with a fatal crash rate of 6.08.

During the past few years, more and more people are riding bicycles as their principal method of transportation due to the economics of owning a car, or restrictions due to their immigration status. Although some people may be denied a license, they still have their legal right to sue for their injuries and losses.

There are many injuries that can occur during a bicycle crash. Some are mild, and can include anything from a bruised knee to a scraped elbow. However, some injuries are more serious and life threatening, and can wreak havoc on a person’s life.

What is being done to protect bicyclists on NJ roads?

While not every accident can be prevented, there are many steps that can be taken to ensure the protection of as many bike riders as possible. New Jersey has been trying to create safety programs for pedestrians and cyclists, with the legislature sending a bill to Governor Christie. This would focus on preventing injuries and death by improving infrastructure, and ensuring that the focus of future road projects be on pedestrian safety rather than convenience for motor vehicles.

Several towns and counties in New Jersey have adopted “Complete Streets” policies, which are designed to guarantee the safety of all users. According to the website njbikeped.org, “Complete Streets are for everyone. They are designed and operated to enable safe access for all users… [so that] pedestrians, bicyclists, motorists, and public transportation users of all ages and ability are able to safely move along and across [the street].” As of 2017, there are 134 participants in the “Complete Streets” program.

What are your rights?

While there are generally no rules that differ between bikes and motor vehicles, it is important to note that usually, auto policies do not cover bicycles, unless they are motorized. However, the accident may be covered under your homeowner’s policy.

NJ and NY are  known as “no-fault insurance” states, which means that no matter who or what causes an accident, it is your own insurance company that is responsible for your medical bills. If you are not in a no-fault state, then you must prove your damages.

If you or anyone you know were involved or injured in a bicycle accident, please contact one of our highly trained attorneys today and we will answer all of your questions.