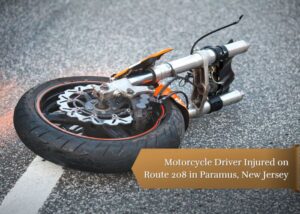 Over the 4th of July holiday weekend, a retired Teaneck police officer was critically injured while operating his motorcycle on Route 208 in Paramus, New Jersey, after his motorcycle collided with a defective piece of roadway on a Route 208 overpass, causing him to be thrown from the bike. Fortunately for the rider, he was quickly transported to Hackensack Meridian Medical Center by the Glen Rock volunteer ambulance Corp.

Route 208 remained closed for over two hours between Maple and Lincoln Avenues in Glen Rock during the afternoon of July 3, 2022, while the NJ Department of Transportation made repairs. According to reports, the defect in the roadway was a defective expansion joint. The accident scene was under investigation by the County of Bergen and other local authorities. An official police report will follow. The accident scene was preserved by Boyd Loving, a freelance photographer who documented events after the collision.

The Primary Cause of Motorcycle Crashes Isn’t Usually The Rider

Motorcyclists, like other motorists, such as cars, trucks, and buses, expect to operate a vehicle on a safe roadway. People often, without good reason, blame the motorcyclist. Let’s be clear, driving and riding a motorcycle is not negligence, nor is it particularly more dangerous than riding a bicycle if the operator is conscious of their safety and the safety of others.

Most of the time, motorcycle accidents are caused by the negligence of others, including any of the following factors:

Who is Responsible For Roadway Maintenance in New Jersey?

The responsibility to maintain the roadway does not fall on a motorist, but on the agency responsible for such road or highway. Those responsible could include the state of New Jersey, the county, or a municipality. If on the Garden State Parkway, or I95, it would be the New Jersey Turnpike Authority and the New Jersey Department of Transportation.

Roadway defects can be caused either by design or maintenance. The authority, municipality, or governmental agency responsible for the upkeep of the roadway is also responsible for inspections. Many drivers have been stuck in traffic jams on highways such as the New Jersey Turnpike, only to see construction workers cutting holes in the pavement. The workers and engineers do this for our safety to inspect the integrity of a bridge or roadway. The same holds for inspecting expansion joints on highways that could create a potential hazard.

What To Do After a Motorcycle Wreck Caused By Poor Road Conditions?

A lengthy investigation will likely occur to determine this highway defect’s cause and origin. However, since the accident happened on a public roadway, the injured motorcyclist must give notice to all potential defendants on a special form called a Tort Claims Notice. This must be done within 90 days of the injury date; otherwise, the accident victim will likely lose their right to sue. The public entities to be served with separate tort claims notices within 90 days include the State of New Jersey, the County of Bergen, the Township of Glen Rock, the New Jersey Department of Transportation, and others. Even though these entities aren’t likely to be held accountable for negligence, their subcontractor or engineers may be found negligent. Either way, sound legal advice to the injured biker is to file those notices immediately.

Contact the Motorcycle Accident Lawyers at Davis, Saperstein & Salomon To Represent You

Blaming others for a motorcycle crash is common. The writers Garry Salomon and Adam Lederman are partners at Teaneck’s personal injury law firm Davis, Saperstein & Salomon, PC. and head the firm’s motorcycle collision team. Recent motorcycle cases handled by their team resulted in out-of-court mediated settlements of $4.5 and $5.75 million. One case involved a careless bus operator and the other was a negligent ambulance driver, where both drivers blamed the motorcycle operator. Despite their defenses, the motorcyclists won their cases.

Injured motorcyclists should not hesitate to reach out to one of the accomplished motorcycle attorneys at Davis, Saperstein & Salomon. The motorcycle accident attorneys certified by the Supreme Court of New Jersey as civil trial attorneys at Davis, Saperstein & Salomon, PC have the talent, resources, and experience necessary to achieve the best possible outcome and can even help a family find experienced motorcycle lawyers in any of the 50 states in the US.   Contact the firm’s motorcycle partners Garry Salomon or Adam Lederman for a free consultation at 1-800-LAW 2000.