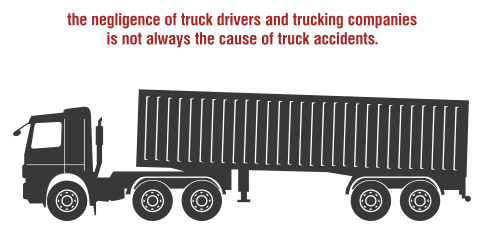 You may be surprised to learn that, based on federal government statistics, the negligence of truck drivers and trucking companies is not always the cause of truck accidents.

In the spring, the federal agency that is in charge of regulating interstate trucking in the U.S., the Federal Motor Carrier Safety Administration (FMCSA), issued its annual report on large truck and bus crashes.

According to the chart, the other vehicle did something to make a crash imminent such as entering or encroaching into the large truck’s lane in: 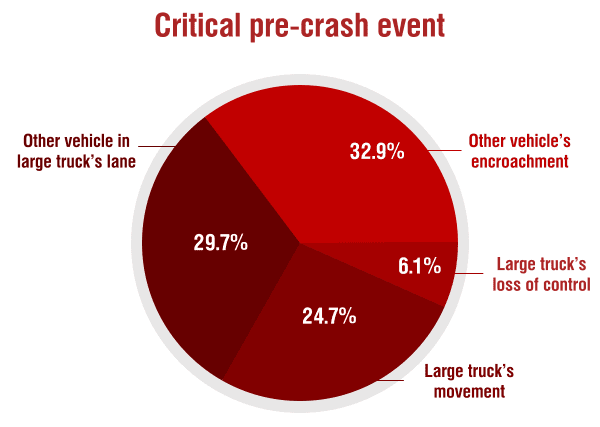 As these figures indicate, many within the trucking industry actually do focus on safety. However, the problem is that not all of them do – and the results of their negligence can be devastating.

According to the same FMCSA report, out of the 3,159 people who died in multiple-vehicle large truck crashes in 2013, 89.7 percent were drivers or passengers in the other vehicles, or a total of 2,833 people.

Unfortunately, as our law firm has learned through decades of helping truck accident victims and their families in New Jersey and New York, many accidents involving tractor-trailers can be traced to entirely preventable causes, including:

Truck drivers often engage in reckless, aggressive driving on the road such as speeding in order to stay on their delivery schedule. They often can be seen driving much faster than the 65 mph speed limit on Garden State highways or going way too fast for icy, snowy, rainy or foggy conditions.

The FMCSA’s hours-of-service regulations place strict limits on how much time truck drivers can spend on the road. The purpose is to prevent crashes caused by drowsy drivers who are impaired by fatigue or falling asleep at the wheel. The problem is that some trucking companies put profit before safety. They may encourage or even force drivers to break these rules by setting unreasonable delivery schedules (and then falsifying logbooks to cover it up). 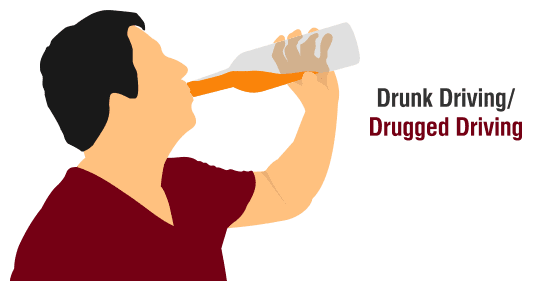 As Reuters reported in 2013, a study published in Occupational and Environmental Medicine found that truck drivers’ use of alcohol and other drugs such as prescription drugs, marijuana, amphetamines and cocaine is both “high and linked to poor working conditions.” Drivers may use alcohol and drugs in response to stress or to combat fatigue. When they do drink or use drugs while driving, it impairs their thinking and motor skills and causes horrific crashes.

According to the FMCSA report, distraction and inattention rank behind only speeding among driver-related factors in truck crashes. While eating, drinking, reading a map and playing with the radio are all types of distraction that can cause 18-wheeler accidents, the biggest concern is use of cell phones to talk or text. This is why the FMCSA prohibits hand-held cell phone use by drivers.

A driver can easily lose control of an 18-wheeler if it is carrying too much cargo or if the cargo is not properly secured. In particular, unsecured cargo can shift and cause the truck to jackknife.

Trucking companies have a duty to carefully screen drivers before they hire them and put them on the road. All too often, negligent trucking companies fail to perform background checks and employ drivers who lack certification or have a history of accidents and criminal charges. Another issue is a trucking company’s failure to properly supervise drivers after they are hired by requiring them to undergo routine drug testing and safety training.

Failure to Inspect and Maintain Vehicles

To save time and money, a trucking company may skip pre-trip and post-trip inspections of the vehicles within its fleet or may fail to make necessary repairs. As a result, motorists may be exposed to mammoth vehicles that have no business being on the road.

Defective tires (including wheel roll-offs) and bad brakes are the leading vehicle-related factors in fatal truck crashes, according to the FMCSA. While some truck accidents can be traced to a trucking company’s failure to properly inspect and maintain these and other parts, crashes may also be due to the negligence of a manufacturer.

Get Help from a New Jersey Truck Accident Attorney

If you or a loved one has been harmed in a truck accident in New Jersey or New York, you should contact an experienced truck accident lawyer without delay. It is important to begin an immediate investigation into a truck crash in order to prevent evidence from being lost, hidden or destroyed.