Missy Duarte is a senior Associate at Davis, Saperstein & Salomon, P.C. Originally a native of Bergenfield, New Jersey, Missy graduated from Seton Hall University with a double-major in Psychology and Criminal Justice. While attending Seton Hall, Missy made the Dean’s list, served as a student officer for the Community Standards Board, and was a cheerleader for the Men’s Basketball team. After graduating from Seton Hall, Missy attended law school at Florida Coastal School of Law in Jacksonville, Florida. While attending law school, Missy was a member of the Mock Trial Team, the Hispanic Law Student Association, and the Black Law Student Association. She graduated law school with Juris Doctorate, a certification in legal research, writing, and drafting, and was recognized as a Pro Bono Honors recipient. 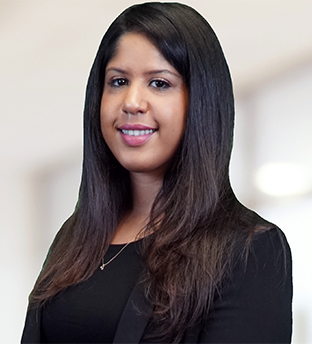 Prior to joining David, Saperstein & Salomon, P.C., Missy worked as an Assistant Public Defender in Florida, defending indiginent individuals accused of misdemeanor and felony crimes. In her time as Assistant Public Defender, Missy has tried seventeen cases before a jury and two bench trials. In fact, in 2015 Missy was the recipient of the “Hat Trick Award” for returning three consecutive “Not Guilty” verdicts in favor of her clients.

As an Associate for Davis, Saperstein & Salomon, P.C., Missy is a member of the litigation practice group, concentrating her practice to personal injury litigation which includes premises liability and motor vehicle accidents. Applying her prior legal experiences, Missy is dedicated to protecting and advocating for individuals who have been injured. Missy is admitted to practice law in Florida, New Jersey State Bar, and the New Jersey District Court Bar. She is also fluent in Spanish and a member of the New Jersey Association for Justice.

In her spare time, Missy enjoys working out, being outdoors, and cooking for her friends and family.