Ethicon’s POP Kits Are the First to Be Pulled from Market, Others Likely to Follow 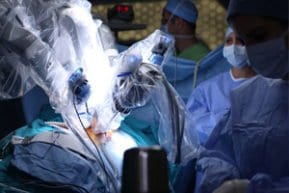 All four products were used to provide support for organs within the pelvic region that had fallen or protruded into the vaginal wall due to weakened or stretched muscles. The Proift and Prosima systems—commonly termed “POP Kits”—are marketed as minimally invasive solutions for pelvic organ prolapse (POP) repair. These products consist of synthetic woven polypropylene mesh, which is pre-formed and pre-packaged in “kits”. The TVT Secur is a synthetic “mini sling” used to treat Stress Urinary Incontinence (SUI), involuntary leaking of the bladder. This product—also marketed aggressively as “micro-invasive”—requires a single intra-vaginal incision as opposed to other TVT designs, which require additional abdominal or upper-thigh incisions.

Ethicon Inc., and Johnson & Johnson are currently facing hundreds of lawsuits filed by individuals claiming that they have developed serious injuries caused by the Ethicon pelvic mesh implant systems. Nearly a thousand women have filed lawsuits alleging that the Ethicon meshes cause pain and injuries as they erode and shrink over time. As a result of such lawsuits, Johnson & Johnson has initiated a recall of the aforementioned four products.

More than 6,000 cases of synthetic pelvic mesh failure were reported between 2005 and 2010. According to the FDA, approximately 10% of women undergoing synthetic mesh POP repair experienced mesh erosion within 12 months of surgery. Aside from being scrutinized by the FDA, synthetic pelvic organ prolapse mesh has been under attack by the medical community and has faced intense criticism in scientific literature. It is likely that other manufacturer will follow suit and initiate the withdrawal of such products from the market. There are several alternatives in existence for POP repair that do not involve transvaginal mesh. Thus, such alternatives do not pose the risk of permanent tissue and nerve destruction caused by mesh degradation and erosion.

If you are injured, call Davis, Saperstein & Salomon, P.C. today for a free consultation

If you have been injured by defective synthetic pelvic mesh implants, you may be entitled to compensation. We are currently accepting cases that have resulted in infection, tissue and nerve destruction, perforation or puncture (of the bladder, bowels, intestines, or blood vessels), obstruction, and other injuries requiring additional surgery, IV therapy, and/or blood transfusions.